If you want registers to be pre-filled with the right attendance code when a student is off school, you'll need to log a planned absence with a pre-fill mark. 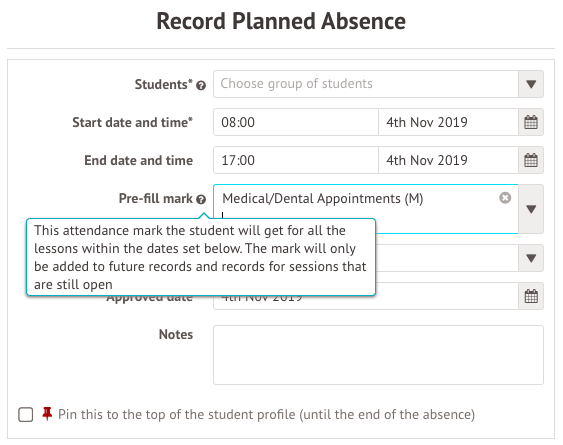 This mark is what will appear in the register as the default mark for the student for the duration of the planned absence.

To make sure the absence appears in the register, please advise your teachers to only open the register when they are going to take attendance.

If they are in the opened register when a planned absence is logged, this may cause the pre-fill mark to not populate into the register. This can result in the wrong absence code being logged by the teacher.

If your school logs planned absences at the same time as registers are taken, we would advise to either tidy up any incorrect marks using the Bulk Edit Marks pages, or to change your processes so you log planned absences before or after the registration period begins.

For example, this afternoon I have logged a planned absence for Lisa and set it to begin this morning. The old mark for today's register has now changed to the pre-fill mark from the planned absence.

If a whole class is isolating, the quickest way to fill in their attendance is to add a planned absence for the students for the full duration they will not attend school, with the correct absence code as the pre-fill mark.

Whenever the class is due to take place, you will need to open the register for the planned absence marks to pull through as this will not update marks automatically. Go to Students > Attendance, click into that class' register and click the Open Register button to open it and pull through the marks. You can then edit marks in Bulk Edit Marks.

You can also record absences for an individual student. Just go to the Attendance > Dashboard section of their Student Profile. 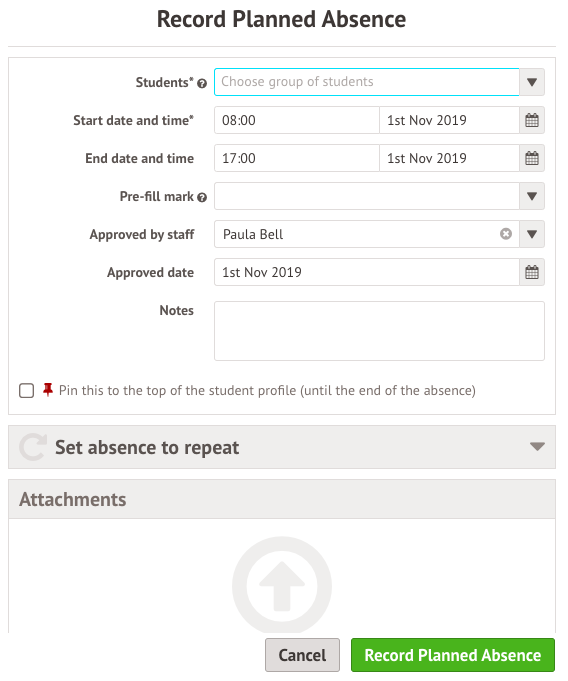 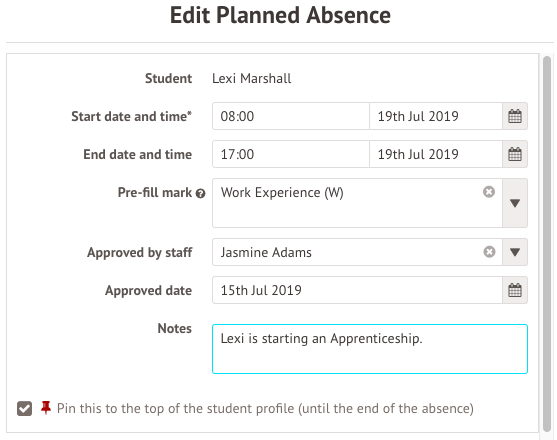 Then click to open the Set absence to repeat section to turn the single absence to a repeating one.

You can then select when you want the absence to repeat - daily, weekly, every other week or every week A/B (dependant on the current week).

Then select the end date the absence will repeat until or the total number of absences you want to create.

Once you have chosen your settings, click Record Planned Absence. All the absences will then show in the table.

Note the circular arrow in the Notes column showing that the absence is part of a repeating absence. 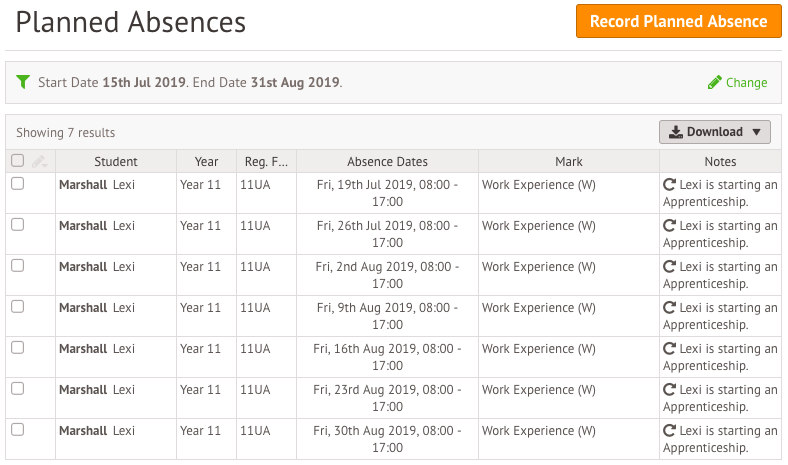 What happens if a student already has a planned absence?

If one or more students you've selected already has a planned absence that overlaps with the one you are logging, the planned absence will not be logged for these specific students.

Click the link in the pop up to view a list of these students, and take further action if needed.

Can we change the default start and end times?

When logging a planned absence, the default start and end times of the absence will be based on the timetable lessons at your school (not the roll-call times) - but you can amend the duration of the planned absence as needed. The default times cannot be amended.

The times are based on today, even if you're logging an absence for a later date. They are based on scheduled lessons and do not take into account any other events such as meetings or clubs etc.

Please note, you will only be able to edit an absence in these ways if it has been created as part of a Repeating Planned Absence.

Editing the start or end times of the absences in bulk

To edit the times of the planned absences, click an absence.

In the slide over, select the Manage repeating absence action. 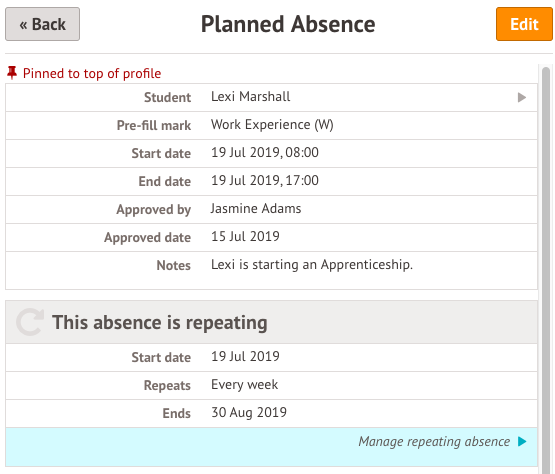 You will then be able to edit the times of the absences in bulk. 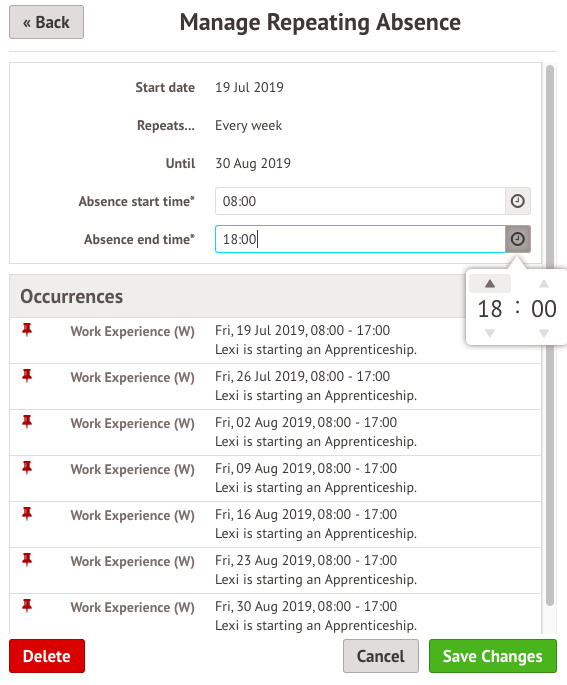 Editing one of the absences

To edit only one instance of the absence, click the instance you want to edit.

In the slide over, click the orange Edit button. 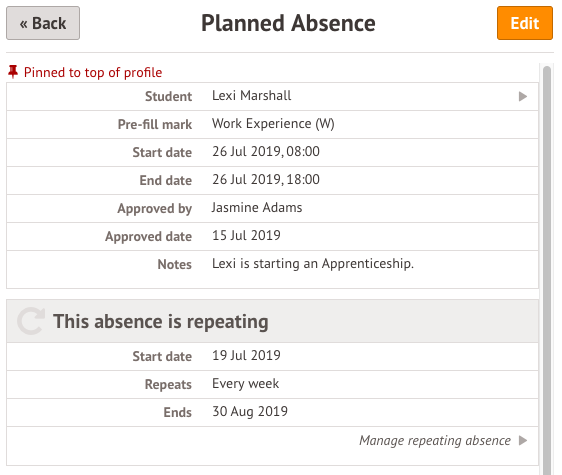 You will then be editing that specific absence instance. In the example below, I've changed the start time for the instance on the 26th to 1 pm, rather than the usual 8 am start. Once you have made the changes, click Save Changes. 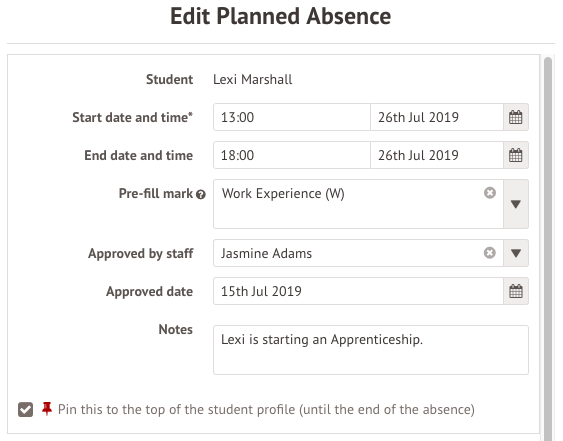 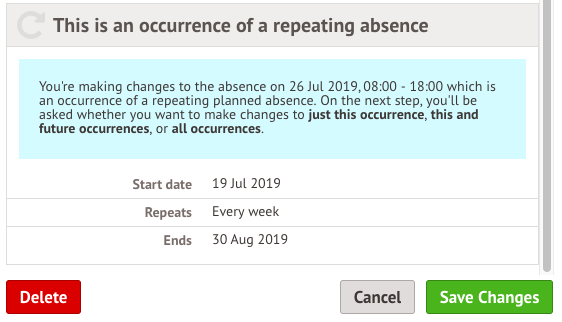 You will be asked to confirm your changes. 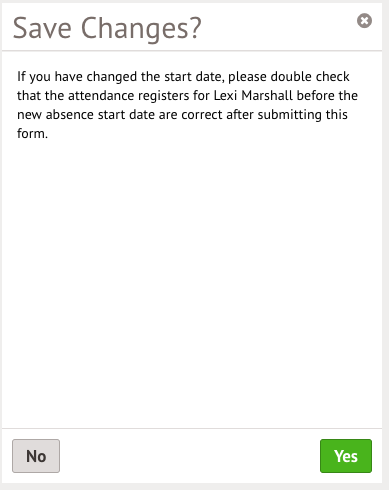 Finally, you will be asked which instances you want your edits to apply to.

In my example, I only want to edit the instance I selected, so I choose 'Only this occurrence', but you can also choose to edit all future instances or all occurrences. Then click Save Changes. 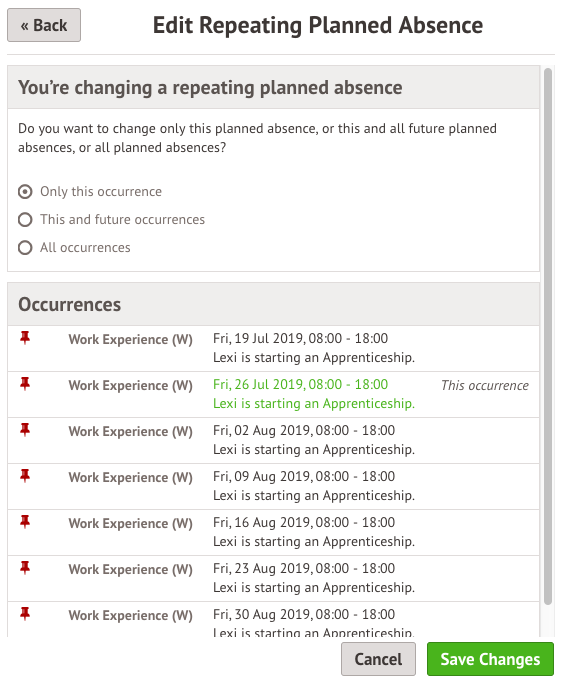 You will then be able to see in my example that the times have changed for one instance of the planned absence.

Select the boxes next to all the absences you would like to delete, then click the blue pencil icon and select delete Planned Absences. 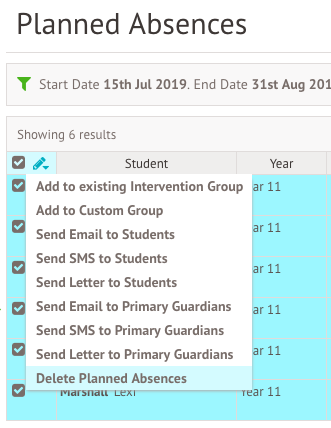 You will then be asked to confirm to permanently delete the absences.

Click the absence you want to delete. Click Edit in the slide over, then click the Delete button. You will be asked to confirm the deletion. 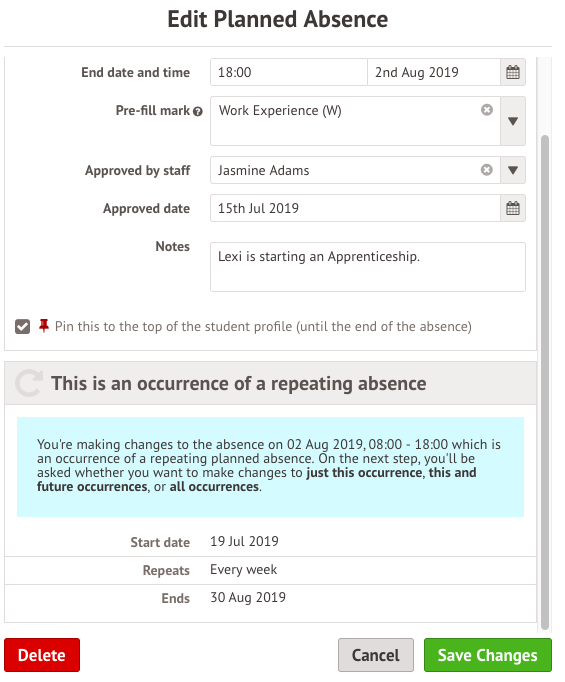